Nun Of My Business 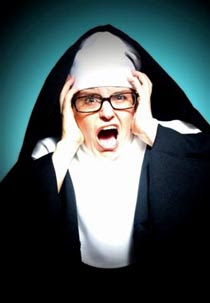 She was a gigantic Irish woman decked out in full parade float nun's habit including a floor length veil attached to a big cylindrical starched linen box on her head that creased her ever-perspiring forehead like an inquisitioner's torture gadget.

I thought it a good place to store cookies.

She spoke with a thick brogue and I thought she must've done something awfully wrong since the Church assigned her, a woman of great heft and in all those robes and veils,  to the hottest un-air conditioned elementary school in Florida.

This had to have been her Purgatory.

She was well known for her  impeccable aim when she swung her oversized rosary beads, which were always ready at her waist tucked into her belt.  Dom was the smallest joker in 4th grade and was what we probably now call "hyperactive."  For that matter, we were all hyper.  Dom was special though.  His particular style of fidgeting and whispering made Sister lose what marbles she had left underneath her cookie tin headgear.

He stood and grinned at all of us.  With a whiplash so fast the eye couldn't follow it, she caught him just below the knees with those beads laying him out flat on the floor.  She stood over him and shouted:

"Who made you Dominick?"

And Dom said, "Mom and Dad did Sister. Wanna know how?"

The Baltimore Catechism was her mainstay, and Dom was being what we now call "oppositionally defiant"  by not barking out the right answer:  Right answer:  "God made me." 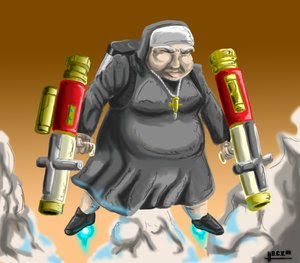 Sister Kathleen Marie, red faced and hyperventilating, cleared the classroom.  We stood in the hallway outside listening to her shout in English and Gaelic as she chased Dom, the "demon spawn imp who will burn in the unending fires of  hell" from one end to the other.  Her shouts were punctuated by the sounds of furniture being displaced violently, and yes, Dom laughing as he eluded her.

Got to love Dom.  Last I heard, he ended up a huge success owning a couple of "gentlemen's" clubs. His destiny was locked in 4th grade.

And Sister Kathleen Marie I will never, ever forget.
Posted by Linnnn at 8:45 PM 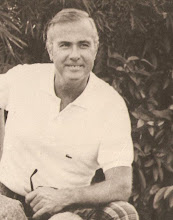